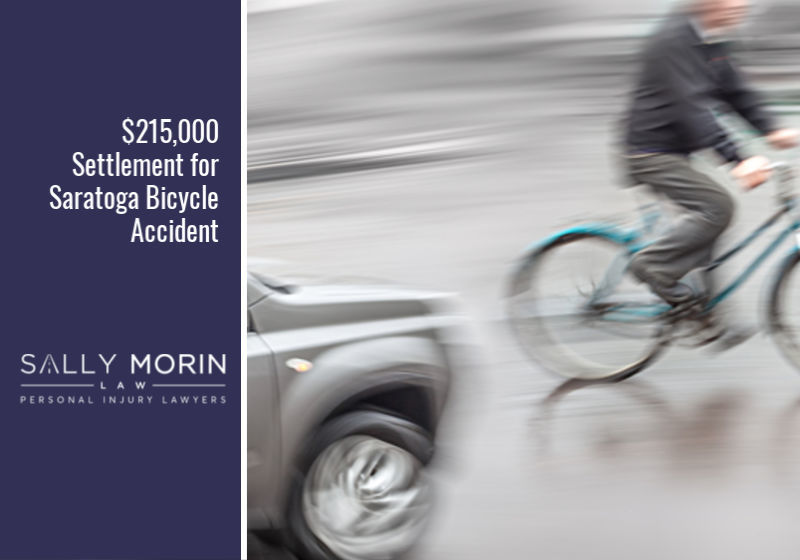 A 69-year-old grandfather and avid bicyclist suffered serious injuries in a bicycle vs. automobile accident while he was riding on Quito Road in Saratoga, California.

The bicyclist was taken to the emergency room where doctors diagnosed him with a fractured neck, nose, and ankle, as well as a brain bleed. The bicyclist worried about the long-term physical and financial impact of his injuries, as well as was stressed as the medical bills began pouring in. He knew he needed help and to focus on his healing, so he hired Sally Morin Personal Injury Lawyers to assist him with his case.

As the case progressed, there were a number of challenges including a low initial case value due to the bicyclist’s minimal follow-up medical treatment. The Sally Morin team knew that the medical bills did not accurately reflect the bicyclist’s case value, so they carefully documented the bicyclist’s pain and suffering to maximize his case value and increase his settlement. They also worked with his auto insurance company to utilize his own medical payments insurance coverage to minimize his out of pocket medical costs. They also meticulously tracked his medical bills and negotiated down his outstanding balances so that the bicyclist could walk away with as much as possible from his personal injury settlement.

The experienced accident legal team at Sally Morin Law obtained a settlement of $215,000 for the bicyclist, putting over $130,000 in his pocket after all of his medical expenses were settled. The bicyclist was beyond pleased!