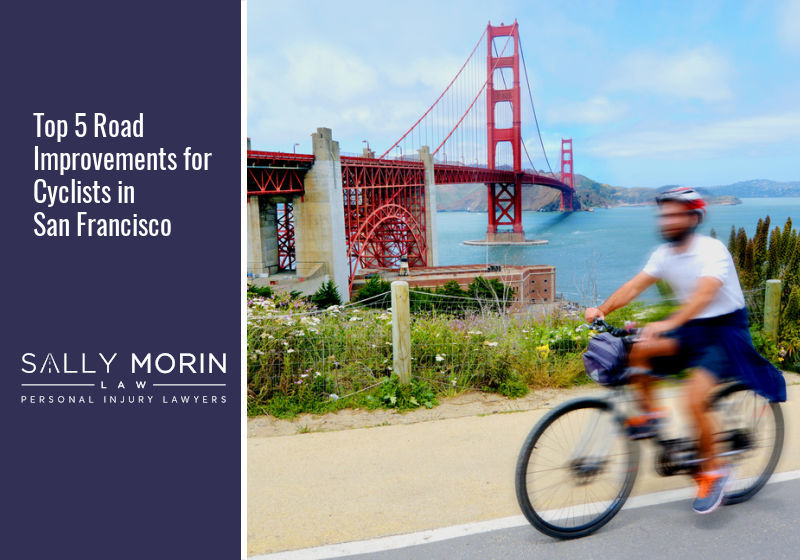 San Francisco is a world leader in creating innovative ways to support bicyclists on our roads. And that’s a wonderful thing because so many of us cycle to work, shop, eat, stay healthy, and visit our friends and family.

About 6% of all San Francisco travel is by bike and 16% of the city’s residents bike regularly. With so much public demand for bike access, the city’s leaders have launched numerous bike-friendly road projects in the city.

In the past 10 years, there have been more than 30 bike infrastructure and safety projects, including the ambitious Vision Zero project to eliminate traffic deaths. These efforts involve massive road construction projects and public awareness campaigns to crack down on issues like aggressive driving, distracted driving, and drunk driving.

It’s also good to see a rise in awareness about the risks of driverless Ubers, plus new laws that are trying to keep bicyclists safe from dangerous drivers. The city has added or renovated more than 130 miles of bike lanes and spent more than $25 million per year supporting bicyclists and saving lives.

Here’s a look at some of the top bike-related road improvements you’ll see around San Francisco today.

Market Street is known as San Francisco’s cyclist highway and handles thousands of riders every day. It’s also dangerous, despite many previous attempts to improve rider safety. That’s why it’s been at the top of the list for bike-friendly improvements for decades.

The latest version of Market Street improvements is called the Better Market Street project. It encompasses some of the best ideas and lessons learned from other projects, like the Safer Market Street plan from the San Francisco Bicycle Coalition and a pilot program for raised bike lanes called the Raised Bikeway Demonstration Project.

However, the San Francisco Bicycle Coalition now opposes many of Better Market Street’s changes. That’s because the plan was revised to remove many of its original safety innovations, which could make it counterproductive in the long run.

If you need to zig-zag from Market Street to Golden Gate Park, it’s time to take The Wiggle. This is a fairly flat stretch of paved surface that allows cyclists to avoid some of San Francisco’s steepest and most dangerous hills. Its underlying structure is formed by an ancient creek bed that runs between hills and forms a naturally flat area.

As a traffic project, The Wiggle is one of the largest and most successful improvement plans by the San Francisco Bicycle Coalition. It promotes bike access among the eastern, central, and western neighborhoods of the city. Unlike the rest of the city’s streets, The Wiggle’s incline never exceeds 6% and provides a good riding surface for cyclists.

When you ride The Wiggle, you’ll see an array of San Francisco’s best road safety features. These include protected bike lanes, buffer zones, traffic diverters that look like flower planters, sidewalk extensions, and oversize painted road surface markings that help the public understand how to use The Wiggle.

One of San Francisco’s latest safety innovations can be found in the Tenderloin, which has been historically neglected in terms of road safety improvements. They’re called scrambles, and although they’re primarily for pedestrians, they improve safety for cyclists too.

A scramble stops vehicle traffic in all directions and allows smaller road users to pass through the area without worrying about being hit. The first one was installed on Golden Gate Avenue at the multi-directional intersection with Hyde Street and Leavenworth Street.

One of the largest newly-renovated areas stretches from the Panhandle to Ocean Beach along Golden Gate Park. It’s a completely car-free zone that welcomes bicyclists and pedestrians to cycle, walk, and linger near the park where they might have zoomed right past in a car.

Seeing this success, some communities are reaching out to authorities to request an extension of the Slow Streets program to their neighborhoods. For example, some Jones street residents are asking the city to bring Slow Streets deeper into the Tenderloin due to the social distancing challenges their children are facing.

Road Improvements for Cyclists in San Francisco are Welcome

At Sally Morin Personal Injury Lawyers, almost all of us here are avid cyclists who understand the challenges of biking in a big city. Many bicycle accidents in San Francisco are caused by distracted drivers who just don’t seem to give cyclists the same respect as others on the road.

That’s why San Francisco’s latest road safety improvements are such a breath of fresh air. It’s becoming easier to envision a future where San Francisco’s cyclists rule the roads.

After a traffic injury, contact the attorneys at Sally Morin Personal Injury Lawyers. We handle many areas of the law, including bicycle accidents. We believe you should be able to focus on recovering while we handle the legal details.

We truly care about the people of San Jose and all of California. Contact us today for a free online case evaluation.