Do you frequently drive through an intersection that’s a magnet for accidents? Almost every city in California has certain accident-prone areas that are constantly in the news for crashes.

It’s nerve-wracking for a motorcyclist! Any time you pass through one of these dangerous intersections, you’re at risk of severe injury from a crash.

Motorcycle accidents at intersections are a constant problem in California. No matter how many safety laws and ordinances we have, accidents still happen. Watch out for these dangerous intersections in the Los Angeles area and nearby communities.

This large LA intersection has double lanes of traffic both ways. There are also numerous stores and restaurants near the intersection, increasing the odds that vehicles will be turning in various directions as they go in and out of the shopping plazas.

This busy area in Los Angeles brings together north-south traffic on Beachwood Drive with Franklin Avenue near the US 101 ramp. As traffic travels in multiple directions, it’s easy for an accident to happen.

This major east-west thoroughfare stretches for more than 80 miles and is a common site of high-speed collisions. It’s a very dangerous road for motorcyclists, especially at intersections.

State Road 78 extends from east to west nearly across the entire state of California. It includes some of the state’s most accident-prone intersections and can be a nightmare for motorcyclists.

Extending from Mexico to the Coachella Valley, State Road 86 covers a huge amount of territory and connects many rural communities. It often has slow-moving vehicles and trucks turning across the roadway, posing danger for motorcyclists.

This busy intersection near Television City in Los Angeles is a dangerous intersection for motorcycles. Drivers are coming in and out of a nearby grocery plaza, plus there are gas stations, fast food restaurants, and many other businesses nearby that create congestion.

This is often highlighted as one of the most dangerous intersections in Oakland. It’s near an on-ramp for the Grove Shafter Freeway, which also joins with Interstate 580 within a mile of the intersection, so there’s a huge amount of traffic traveling through a tight spot here.

Just south of Hollywood Heights, this busy intersection is near the famous Hollywood Wax Museum and sees heavy traffic from tourists and travelers. For a motorcyclist, this is a dangerous area with lots of traffic congestion and hazards from moving pedestrians.

This is one of the most dangerous roads in California and at times, has seen nearly one fatal accident per mile. It’s nearly 800 miles long and its entire length is a dangerous place for motorcyclists.

Interstate 8 is the main highway that stretches about 170 miles from San Diego to Costa Grande. Although you’ll frequently see motorcyclists taking this drive, it’s always a risky thing to do because of the interstate’s high rate of accidents.

Anyone who travels from Las Vegas to San Bernardino has probably taken Interstate 15, which is about 180 miles long. A news story called it the Highway to Hell due to its extremely high rate of traffic deaths.

You might think of Berkeley as a quiet, laid-back area, but it has plenty of severe traffic accidents. One of Berkeley’s busiest and most dangerous intersections for motorcycles is found at Russell Boulevard and College Avenue.

Perhaps the most dangerous intersection in Santa Rosa is where busy Pacific Avenue crosses over Mendocino Avenue. One of the things that makes this area so dangerous is a steady stream of traffic headed for a nearby on-ramp to US 101.

Every inch of this Los Angeles intersection is packed wall-to-wall with stores and shops, which makes it a very congested spot for traffic. Motorcyclists should also look out for pedestrians and bicyclists who are sharing the roads.

Between US 101 and the LAX, Western Avenue and Slauson Avenue sit at a heavily-traveled crossroads. On top of multiple lanes of vehicle travel, there are also bus stops and railroad lines that make this a confusing area for anyone who travels through it.

This is not only a busy LA intersection but also one of its narrowest, with skinny 6th street creating an ever-present risk of traffic jams and sideswipes.

Finally, there’s US 101, which stretches the entire length from Los Angeles to San Francisco. It has a reputation as one of the state’s most accident-prone roads and frequently makes lists of the most dangerous roads in America.

Do you travel on any of these dangerous roads? If you’re ever in a motorcycle accident, don’t hesitate to find excellent legal representation. Your choices at this critical turning point could impact the rest of your life.

Even when it seems obvious that the other person hurt you, it can be difficult for a motorcyclist to secure full and fair compensation. Please reach out to us if you need a free motorcycle accident case evaluation.

After an injury, contact the attorneys at Sally Morin Personal Injury Lawyers. We handle many areas of the law, including motorcycle accidents at intersections. We believe you should be able to focus on recovering while we handle the legal details. 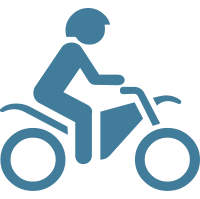 Well I have so much to say about Sally Morin. I was in a motorcycle accident and the other driver was 100% at fault and it changed my life. After reviewing many law firms I chose Sally Morin and from day one I knew I was in good hands. The process gets very stressful and frustrating at time but the entire staff were compassionate and caring from start to finish. They guided me and helped me throughout the process dealing with the insurance companies and just listening to me vent. This accident really messed with me emotionally as well as my physical injuries. Sally and her team were and are absolutely amazing. After a bit of back and
forth with the insurance company we finally settled with a number that I was satisfied with. This settlement was solely due to Sally’s patience and amazing negotiating skills.

Sally Morin sincerely cares about her clients and she is extremely experienced in this field. If you want a lawyer you can trust, one that keeps in contact with you every step of the way, answers any and all questions, delivers real results then Sally Morin is who you need to call.

Thank you Sally and your entire staff for truly making a very difficult and stressful situation manageable. You are all amazing.