What Damages Can I Receive After a Truck Accident? 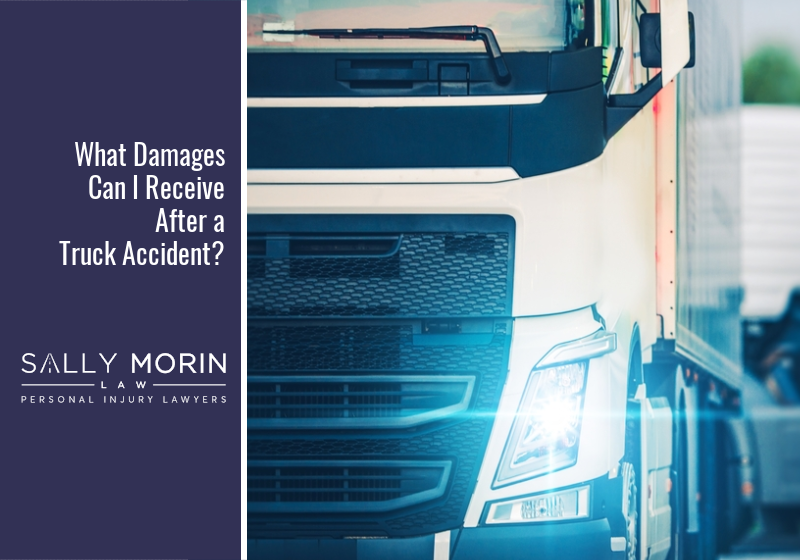 If a trucker severely injures you in a traffic accident, you can initiate a claim to secure compensation for many types of damages. But get ready for a fight! Big trucking companies have lawyers and insurance companies who will do whatever it takes to deny claims.

Here at Sally Morin Personal Injury Lawyers, we see California people go through this struggle day after day. A truck driver slams right into them on the highway or a busy downtown street, but the trucking company tries to wriggle out of paying for the damages. Ridiculous!

You’re entitled to valuable compensation for many types of damages under California law. Let’s take a look at what you might be able to claim after a trucking accident.

Your Medical Bills and Medical Costs

Medical bills usually form the basis of damages in trucking accident cases. Your medical bills help show the extent of your injuries and demonstrate that you sought medical care right away.

You can request compensation for the total value of your medical care, including your pile of medical bills related to the accident, what you paid out of pocket, your prescriptions, and any supportive equipment you’ve used, like crutches, canes, and braces. You can also include costs that aren’t covered by your insurance.

So that means it’s vital to save every bill and receipt related to your accident. Keep track of things like copays and out-of-pocket deductibles, because it’s all recoverable.

You can also ask for the value of your lost wages, including both past and future wages. As long as the lost wages are directly due to the accident, you can likely receive repayment for them – even if your missed workdays occur long after the accident.

Here’s an example. Let’s say your accident occurred in January, but you experience many months of recovery time. A doctor schedules you for reconstructive surgery in September. You can claim the lost wages from your missed September workdays, plus additional recovery time you may have at home afterward.

Many people don’t realize that they can also recover something called loss of earning capacity. This typically arises after a severe injury that affects the person’s brain and/or physical mobility.

Imagine you’re a career woodworker who relies on having full dexterity in your hands. The trucking accident caused movement-limiting hand injuries, so now it will be much more difficult for you to take on lucrative new woodworking projects. Or if you have a brain injury, it could be impossible to continue working at your previous full potential.

Your lawyer can help you calculate your total lost earning capacity. A good personal injury lawyer knows how to demonstrate the impact of the accident on your career and family so you can secure much-needed compensation.

Loss of Companionship and Consortium

A severe injury often impacts someone’s relationships, including close family interactions with their spouse, children, and other household members. The loss of enjoying the same level of companionship and intimacy with your spouse can be particularly devastating.

This is called loss of consortium and it technically applies to the spouse of the injured person, not the injured person. It covers things like loss of affection, support, and marital relations due to the impact of the accident.

The Value of Your Pain and Suffering

A severe trucking accident typically comes with extreme suffering due to the physical pain and emotional trauma involved. This holds tremendous value, but for the average person, it’s hard to give it a precise dollar figure.

Your attorney can help you pin down the monetary value to request with your claim. The calculation usually includes things like physical disfigurement, scarring, and ongoing pain that interferes with your quality of life.

Punitive Damages for the Trucker

Finally, it’s worth considering the potential addition of punitive damages. These damages are intended to punish the person who was in the wrong and deter others from making the same mistake. They don’t apply to all cases, but they’re worth considering.

For example, imagine a situation where a negligent trucking company failed to do routine brake maintenance on their truck for a long period. Using trucking maintenance records obtained by your lawyer, you could prove the company had reason to know there was a high probability of the brake failure that ultimately led to your accident. Punitive damages may apply because it’s outrageous that a trucking company would put the public in danger this way.

This involves a concept known as conscious disregard or complete indifference to the safety of others. It applies to situations where truckers and trucking companies violate federal trucking regulations, plus situations where the trucker was speeding or otherwise behaving negligently.

Maybe the company let the trucker exceed their allowable driving hours, leaving them too drowsy to drive safely. Or maybe the company failed to do proper screenings during the hiring process and put an unsafe trucker on the roads. Leave it to your lawyer to find out!

As you can see, hiring a lawyer is one of the smartest things you can do after a truck accident. Your lawyer can use their investigative expertise to dig up all kinds of evidence that shows the trucking company’s responsibility to provide full and fair compensation for your accident.

After an accident, contact the attorneys at Sally Morin Personal Injury Lawyers. We handle many types of personal injury claims, including truck accidents. We believe you should be able to focus on recovering from your accident while we handle the legal details.

Video Transcript
What damages can I receive after a truck accident? The damages that you can receive after a trucking accident are actually very similar to what you can receive after a regular traffic accident, but I’m just going to run over them quickly so that you have a general understanding of each one.
So the first one, and maybe the most obvious one, is your medical bills. So anytime you’re in an accident and you need treatment for injuries that you sustained in that accident, all of the medical bills, what you’re paying out of pocket, anything that’s not covered by your insurance, all of that is recoverable from the at-fault party. So you want to make sure you’re keeping track of those, keeping a record of any copays, out of pocket deductibles. All of that stuff is recoverable.
The second one that is most obvious to people is lost wages, and that can involve both the past and the future. So let’s say you need to have a surgery in a year. You can recover the wages that you’re going to lose when you have that surgery, as well. You can also recover what’s called loss of earning capacity. So if you sustained a very catastrophic injury or a brain injury or something that makes it so you’re not able to perform your prior job, you can also make a claim for what we like to call loss of earning capacity.
The next thing is called loss of consortium, and this is something that’s actually for the spouse of the injured person and not the injured person himself. This type of damage covers things like loss of affection, companionship, support, marital relations, all of those things are available to the spouse of the injured person through the loss of consortium damage.
The next thing is pain and suffering. And this is something that is hard to put a dollar figure on, like loss of earnings and medical bills, but it is a huge part of your personal injury settlement, and in situations where you have catastrophic injuries, which are pretty common in trucking accidents, the pain and suffering is going to be very high. This also includes stuff like physical disfigurement, scarring, anything like that usually plays into the pain and suffering section of your damages.
The final thing you can have in a trucking accident is something called punitive damages. And this is a type of damage that’s meant to punish the person who was in the wrong and to deter other people from making the same mistake. This is not something that you can get in every case, and you do need to meet a series of facts to prove this part of the damages. An example is if the truck driver or the trucking company knew or had reason to know that there was a high probability that some kind of action that they were doing or a failure to act would result in injury, that can qualify them for punitive damages.
This is also sometimes called the complete indifference or conscious disregard for the safety of others. And you’re going to be looking for facts like the driver was speeding 20 miles over the speed limit to make a deadline, or the trucking company knew about a driver violating their hours of service and let it happen anyway, or the trucking company failed to properly screen their drivers in the hiring process, or maybe it could also be the trucking company has a practice of not inspecting and maintaining the vehicles, and that is what caused the accident. In those situations, you might be able to get punitive damages, in addition to the other damages that I discussed. 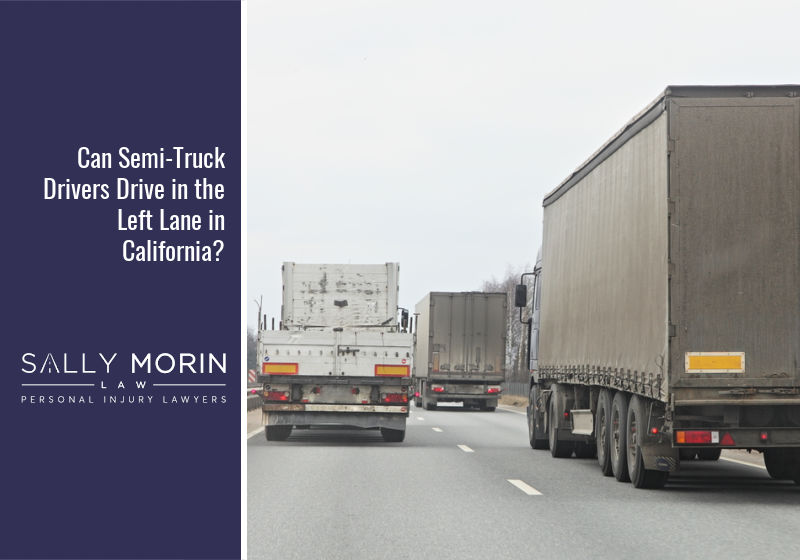 Can Semi-Truck Drivers Drive in the Left Lane in California? 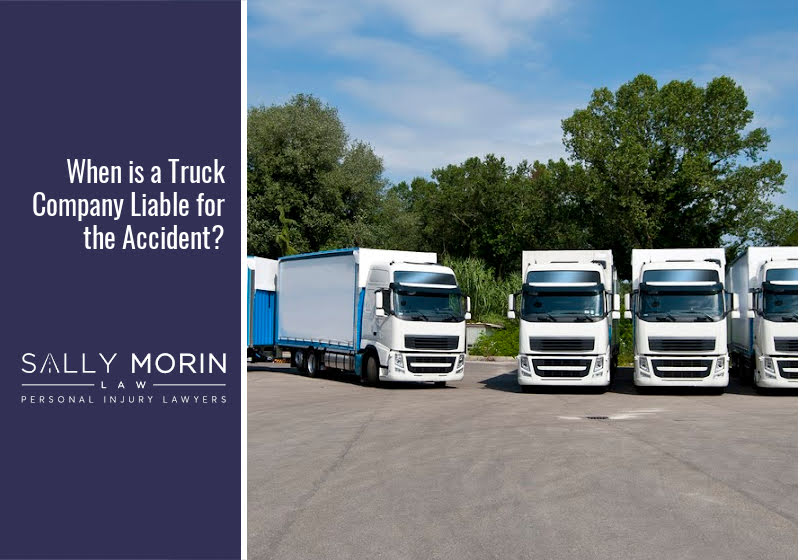 When Is A Truck Company Liable For The Accident? 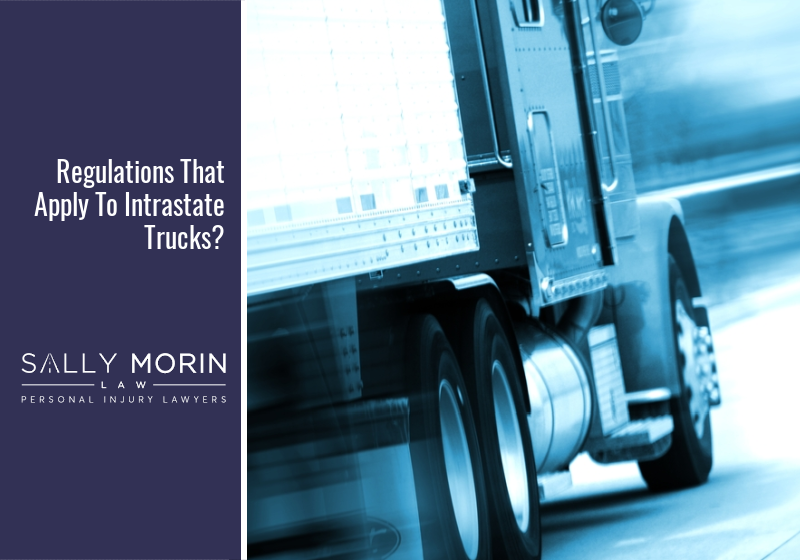 Regulations That Apply To Intrastate Trucks What Regulations Apply to Interstate Trucks? 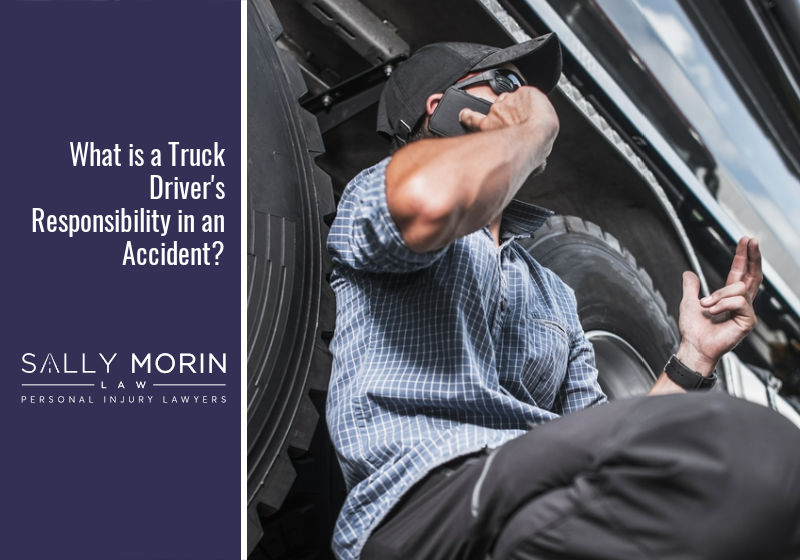 What is a Truck Driver’s Responsibility in an Accident?