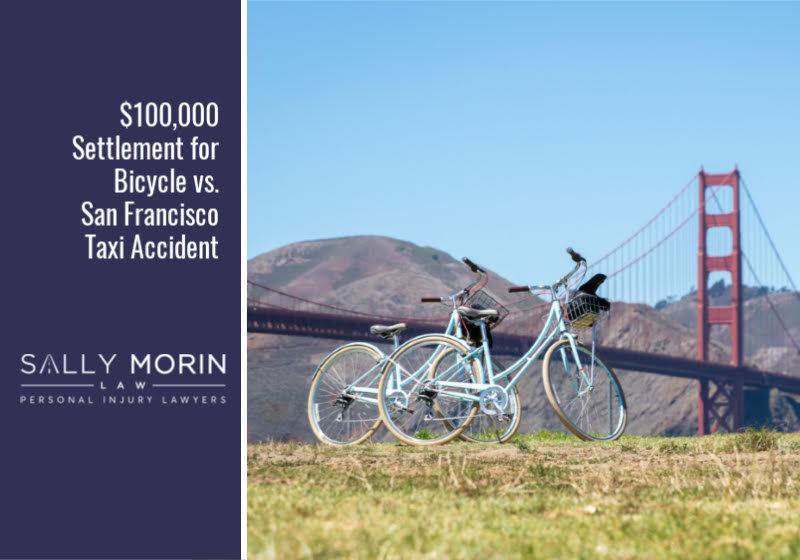 A 34-year-old merchandiser and avid bicyclist was riding home one evening when she suffered serious injuries in a bicycle vs. auto accident at Harrison Street and 25th Street in San Francisco, California. A taxi driver drove up behind from behind her while she was riding her bicycle lawfully in the right hand side of the street. Since it was dusk, she had her bicycle lights turned on so that she remained visible for surrounding vehicles. All the sudden, the taxi driver turned right across her path, pinning her against a parked car and injuring her knee. It discovered that suffered a torn ACL and torn cartilage, which required surgery.

The bicyclist did not get very far in her personal injury claim with the taxi driver’s insurance company. She tried to handle things on her own, but the insurance company stopped responding to her altogether. To add to her stress, she was out of work and immobilized at home, and she needed to focus on healing. Furthermore, her medical bills began piling up and she became overwhelmed with the paperwork and insurance process. The bicyclist knew she needed help with her case, so she hired San Francisco bicycle accident lawyers Sally Morin Law who has successfully obtained solid settlements from San Francisco taxicab companies, including one for almost a million dollars and another for $4.25M.

The bicycle accident case presented many challenges. First, the taxi company denied liability, claiming the bicyclist was at fault for the accident. Also, the insurance company argued that the bicyclist’s case was not worth much due to a pre-existing injury. The cyclist had a previous, healed injury to her knee. Although it was a long, hard battle, Sally Morin Personal Injury Lawyers stepped in and fought to get the bicyclist a fair settlement that accounted for all of her medical bills and damages.

Further, Sally and her team worked tirelessly, including taking the case through the mediation process, to get the taxi company to re-evaluate their liability decision. They also carefully documented the bicyclist’s loss of earnings and pain and suffering, to maximize her case value and increase her settlement. Last, they significantly negotiated down her medical liens.  Most importantly, they alleviated the bicyclist’s stress and allowed her to focus on her recovery and her life.

The experienced bicycle accident legal team at Sally Morin Law obtained a settlement of $100,000 for the bicyclist, putting over $52,000 in her pocket after all of her medical expenses were paid. The bicyclist was beyond excited to walk away with no debt, and a sizable bank account!

We Are Bicycle Accident Experts!

“Sally Morin Personal Injury Lawyers helped me navigate the stress of being hit by a car while riding my bike. Sally and her legal team were patient and supportive and ensured all medical bills and expenses were managed, alleviating quite a bit of unnecessary stress while I recovered. They fought for me and assured me that I would get the full settlement and with her support, they made it happen. I would highly recommend Sally Morin Personal Injury Lawyers.” – Ian