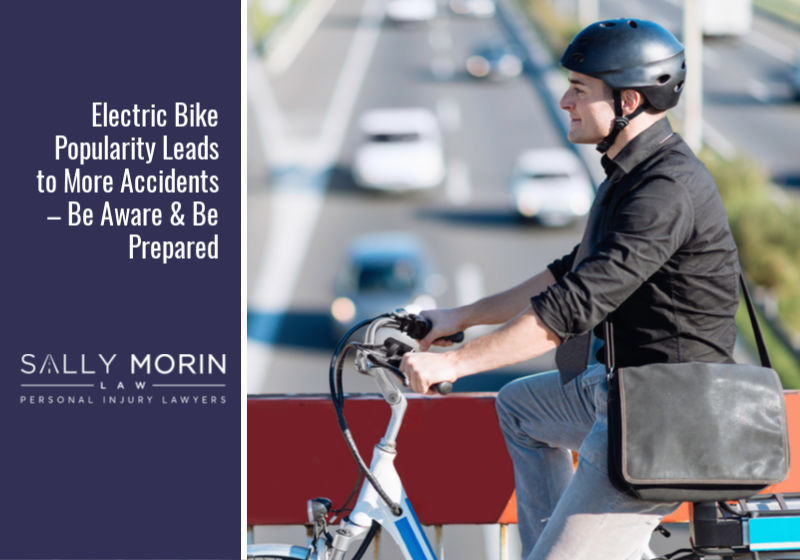 Battery-powered vehicles are all the rage, thanks to their eco-friendly and carbon-free footprint. But we’re not talking about Teslas. Electric bikes, or e-bikes, are extremely popular in California and our state is a hotspot for e-bike buyers.

Why Do People Love E-Bikes in California?

California’s big cities are among the world’s top e-bike markets, alongside U.S. cities like Portland, Oregon, and countries like China – the world’s #1 e-bike market. Get ready to see even more of these bikes on the road. Worldwide sales of e-bikes were about $36 million in 2015 and are projected to be at $100 million by 2035.

People are eager for e-bikes for many reasons. A Portland State University survey found that nationally e-bike riders cite six main motivations for buying them:

An e-bike is convenient for aging people with leg and back pain, those with disabilities, and those with low/fixed incomes. Plus, low-effort riding means you arrive at work without being sweaty!

When you have an e-bike, it can make the daily commute in a city like San Francisco or Los Angeles much easier and faster. An e-bike can easily slip through traffic and let you take side routes to avoid slowdowns.

Could an E-Bike be Hazardous to your Health?

While there’s nothing quite like pressing a button and zipping down the road on an e-bike, accident statistics show that there’s a significant risk of severe injuries. In fact, the risk is higher than both traditional bicycles and electric scooters due to the patterns of injuries involved.

83.3% of e-bike injuries are from male accident victims.

17% of all e-bike accident victims have internal injuries.

E-bike riders are more than twice as likely to suffer internal injuries and be hospitalized compared to riders of pedal bikes or electric scooters.

E-bike injuries are more than three times as likely to involve a collision with a pedestrian than either scooter or traditional bike.

On average, e-bike riders are 1 to 6 years older than scooter riders and traditional bicyclists, which could mean they have more compounding age-related conditions.

Know the Roads and Know the E-bike Laws in California

In many ways, e-bikes are treated like regular bikes in California. California updated its laws in 2015 to accommodate electric bikes and added some language specific to them.

California Assembly Bill 1096 defines an electric bicycle as a bike with fully operable pedals and an electric motor up to 750 watts. It also sets forth three classes of e-bikes:

Class 1: low-speed pedal-assisted. The motor assists when the rider pedals. The maximum speed is 20 mph on paved surfaces.

Class 2: throttle-assisted. A motor exclusively propels the bike. The maximum speed is 20 mph on paved surfaces.

Class 3: speed pedal-assisted. A motor that only propels the bike when the rider stops pedaling. These bikes can reach speeds of 28 mph and in California, riders must be age 16 or older and wearing a helmet. These bikes cannot operate on bike paths.

No license is required to ride an e-bike, but you must follow state and local laws. Obey signs that indicate the use of bike lanes and avoid riding on the sidewalk unless it is permitted in your area.

Visibility. This affects all riders of electric and smaller gas-powered vehicles, including motorcycles, scooters, pedal bikes and e-bikes. Watch out for cars and be aware that other drivers might not see you.

Infrastructure issues. Bike paths for pedestrians and bikes are restricted to low-power e-bikes. Some communities don’t have bike lanes at all, and the type of e-bike you have affects where you can ride. For more information on types of bikeways and which e-Bikes they allow, see our blog post on this topic.

You Had an E-Bike Crash. Now What?

E-bike riders are protected by the same traffic laws as all cyclists. Keep in mind that nearly two-thirds of all bicycle-involved motor vehicle crashes in San Francisco are caused by the motorist, not the cyclist.

After an e-bike accident:

After an e-bike accident, contact the attorneys at Sally Morin Personal Injury Lawyers. We handle many areas of traffic law, including injuries that arise from e-bike accidents. We believe you should be able to focus on recovering from your accident while we handle the legal details. We truly care about our fellow citizens of California. Get a free online case evaluation today.