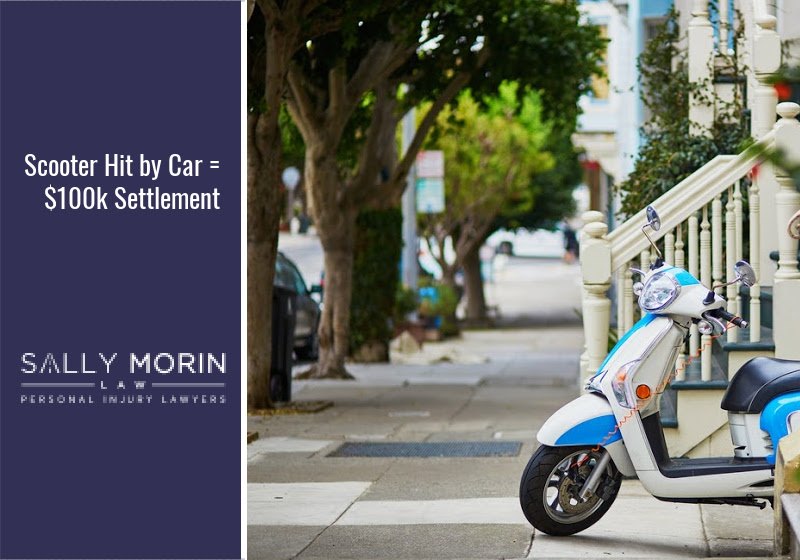 A 26-year-old audio engineer suffered serious injuries in an auto vs. scooter accident at the Highway 80 off-ramp onto 7th Street, in San Francisco, California.

The audio engineer was riding her scooter straight on 7th Street. A driver suddenly darted off of a highway off-ramp onto a busy city street without yielding to traffic right in front of the young woman on her scooter. She had no time or warning to prevent a collision, and was forced to lay down her scooter to avoid hitting the car. Due to the “no-contact” nature of the accident, the driver sadly fled the scene, leaving the audio engineer injured and in the middle of a busy city Street.

After the scooter rider was admitted to the hospital, doctors found that she was suffering from a broken arm and shoulder. She had to undergo surgery, and she had to take off time from work due to her injuries. She knew she deserved compensation for her scooter accident injuries. But, she was overwhelmed by the auto insurance process, her bills and really needed to focus on healing and getting back to her normal life. The young engineer knew that she needed help with her case, so she decided to hire the San Francisco scooter accident experts at Sally Morin Personal Injury Attorneys.

Sally and her team faced some challenges in the case. Luckily, even though the driver hit-and-ran, an Uber driver was behind the at-fault vehicle and caught the entire accident on camera, including the make and model of the vehicle involved and the license plate number. That allowed the team to be able to track down the at-fault driver and open up a claim with her insurance. The audio engineer also had significant medical bills due to her surgery and subsequent rehabilitative treatment. Unfortunately, it was discovered that the at-fault driver had low insurance policy limits.

Sally Morin’s team stepped in and handled everything related to their client’s personal injury claim with the auto insurance company. They carefully documented the audio engineer’s loss of earnings and pain and suffering in order to recover the driver’s insurance limits. However, given that the limits on the policy were minimal, the team knew that they would need to aggressively negotiate down the engineer’s outstanding medical liens so that she could walk away with fair compensation from the settlement funds. They worked hard to hammer the medical liens down, and they alleviated the audio engineer’s stress in the process and allowed her to focus on her healing.

The experienced scooter accident legal team at Sally Morin Personal Injury Attorneys quickly obtained a settlement in only six months, for the full policy limits of $100,000, putting over $45,000 in their client’s pocket after all of her medical and legal expenses were paid. The scooter accident client was happy to put the accident behind her and move on with her life!

Sally just got me a ton of $$$$$ from a scooter accident that I had two years ago. She is easy to relate with and is “good people.” I thought I would not be able to get much back for this accident because I waited so long, and the specifics of the claim were messy. Despite these complications, she kept us from going to trial as she negotiated with the insurance company like a pro (and got more than I expected). It has been quick and easy and I am so grateful. I am getting a check in record timing! Amazing Attorney…Call her up. – Nic L.