What Happens When a Driver Hits You and Leaves the Scene of the Accident? 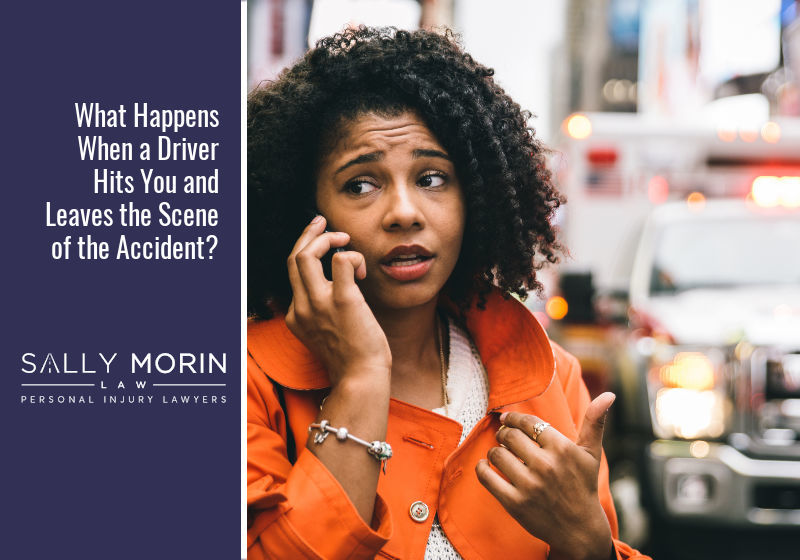 Did someone hit you and drive away? If they injured you or damaged your vehicle and fled, they broke the law. But good news: You can still seek compensation.

California takes hit-and-run accidents very seriously. Anyone who is in an accident with injuries or property damage is required to stop and remain at the scene. Of course, drivers sometimes don’t realize or don’t care that they caused an accident.

Hit-and-run drivers can face misdemeanor or felony charges, depending on the circumstances:

A misdemeanor hit-and-run can result in up to 6 months in county jail, 3 years of probation, and $1,000 in fines. A hit-and-run driver usually faces misdemeanor charges if they fled the scene but nobody was injured in the accident.

A hit-and-run rises to the level of a felony when there are injuries from the accident. These felony charges can result in up to 3 years in California state prison or 4 years if someone was severely injured or killed. There may also be a steep fine of up to $10,000 plus restitution paid to the victim.

Now imagine you were in an accident where the other driver left the scene. What should you do next? What should you NOT do? Here are some tips from the team at Sally Morin Personal Injury Lawyers.

Look around the area where the accident happened. Are there cameras anywhere? Take a good look at businesses, homes, and other buildings in the area. Ask homeowners and business owners to share their footage with you.

Even if you don’t see a camera, there might be one hidden in a doorbell or fixture. If you feel uncomfortable asking for camera footage, your personal injury lawyer can make these inquiries on your behalf – but you’ll have to hire an experienced injury attorney ASAP or else footage could be lost over time

Take Footage of Your Own

You can also take a video of your own. Capture the details of the area, like road signs and intersections. You never know which details may become important later.

Memories will fade quickly after the incident. Get in touch with witnesses as soon as possible –at the scene of the accident is best – to get their side of the story. Ideally, your lawyer is involved in this process.

Get a Police Report

Ask the on-scene police officer for a copy of their report or request a phone number to call and obtain it later. Although the police report does not guarantee you will win your case, it is often a crucial piece of documentation to help you prove it.

You may be tempted to share your story on social media. Don’t do it! Anything you say online could be picked apart by someone else’s lawyer and used against you in an insurance claim.

Resist the urge to rant about what happened online or post pictures of yourself in the hospital. Don’t update your social feeds about your healing progress.

If someone asks you to give a recorded statement,  like a representative from an insurance company, refuse to do so until you consult with your lawyer.

We Can Help You Look for the Driver and Seek Compensation

A personal injury lawyer not only explains your legal options but also launches an investigation to find the hit-and-run driver. Here are some examples of cases right here in California where injured victims won compensation.

$100,000 for Southern CA Scooter Passenger in Hit-and-RunAs two women riding a scooter made a turn in San Diego, a car clipped the tail end of the scooter and the passenger was thrown into the street. The car’s driver sped away from the accident, but Sally Morin Personal Injury Lawyers tracked her down through witness accounts. After investigating several avenues of compensation, we secured a significant level of uninsured motorist funds by working diligently with the California DMV.

$100,000 for San Francisco Motorcyclist in Hit-and-Run AccidentWhen a motorcyclist was turning into his driveway, an impatient driver sped around him and snagged the side of his motorcycle. He crashed violently while the car fled the scene. Luckily, another driver shared their in-car camera footage, which Sally Morin Personal Injury Lawyers used to pursue the maximum limits of insurance policies.

$65,000 for Oakland Bicyclist Crushed by Hit-and-Run DriverDuring his daily 1-mile bicycle commute to work, an Oakland man was struck by a Ford F-350 pickup towing a trailer. The man’s torso was crushed under the trailer but the driver continued down the street, supposedly unaware he’d hit someone. In this complex case, Sally Morin Personal Injury Lawyers ultimately got a deposition from the hit-and-run driver admitting fault and we secured a high-value award for the victim.

$45,000 Settlement for Oakland Bicycle Hit-and-Run VictimAs a bicyclist approached the intersection of West Street and 27th Street in Oakland, a car turned into his right of way and caused him to crash, then drove away. The cyclist worked with Sally Morin Personal Injury Lawyers to reduce his medical bills and gain the benefits of insurance coverage for his injuries.

$25,000 for Bicyclist With Elbow Injuries From Hit and Run DriverA charity bicyclist was training with her group of cyclists when a driver who had been stopped in a driveway abruptly pulled out in front of the group. The cyclist slid off her bike and landed on her elbows, injuries that took expensive and painful surgeries to repair. Sally Morin Personal Injury Lawyers helped her secure $25,000 despite the driver fleeing.

Here’s the moral of these stories: Don’t be discouraged by a hit-and-run driver! They can’t run and hide forever. We may be able to find them for you – and even if they aren’t located, you can still receive a high level of compensation.

“Could not be happier with my experience. Physically injured, anxiety riddled, and emotionally exhausted post accident- I could not have pushed through the accident aftermath alone. Their support was unmatched and I am so grateful for the empathic communication, strong legal presence, direct functioning, and assistance in finding solutions. I didn’t understand anything about my accident, medical insurance, or obtaining legal support- Annie (and Carmen!) made things happen in a way that helped me understand and work through the post accident insanity. I couldn’t be happier with having chosen them to represent me.” – Kira M.

Check out our  Hit and Run Accident Page to learn more about how the process works.

After an injury, contact the attorneys at Sally Morin Personal Injury Lawyers. We handle many areas of the law, including hit and run accidents. We believe you should be able to focus on recovering while we handle the legal details.