What Happens When a Car Accident Occurs Due to a Driver’s Medical Condition? 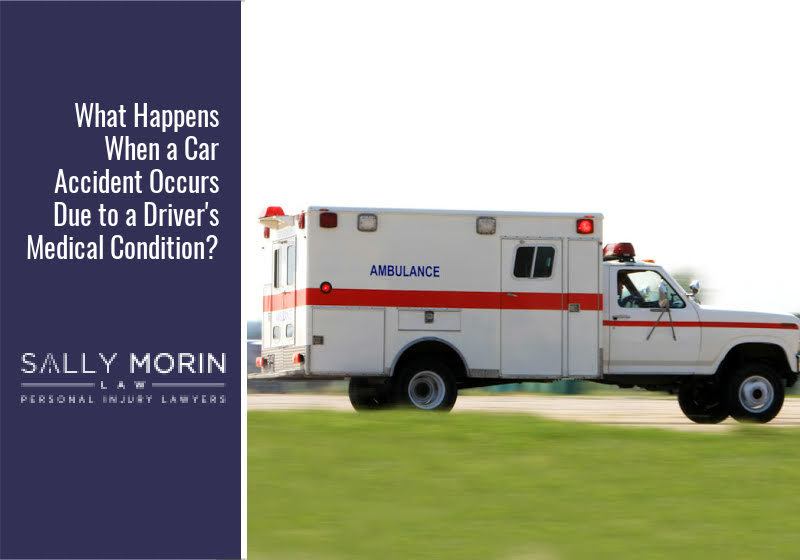 A motorcyclist has a heart attack on a busy highway. A truck driver suffers a stroke, goes unconscious and smashes into a line of stopped traffic.

Wrecks due to medical conditions are devastating on multiple levels. They injure innocent people, compound an already serious health emergency and create a delicate situation where it’s hard to assign blame.

Of course, people don’t always tell the truth about these incidents. Instead of admitting they made a mistake while driving, some people lie and attribute the accident to a medical condition. In some cases, the person truly does have a serious ailment that could impact their ability to drive, but they get behind the wheel anyway.

As an injured victim, you need to know whether you can sue someone with a medical condition. If you think someone is lying, how do you prove it? What if they’re telling the truth? Will you still get compensation for your medical bills and other damages?

California law allows for something known as the medical emergency defense, also called the sudden emergency defense. It only applies if someone has a legitimate and unforeseen medical condition and all of the following three conditions are met:

This means in order to use the medical emergency defense, someone will need to prove that a sudden health crisis arose and they simply acted in a reasonable way as anyone else would. They’ll need to provide detailed medical evidence of their unforeseen health emergency.

Does the Medical Defense Usually Work?

The medical emergency defense isn’t easy to use. It’s commonly challenged by showing the person acted unreasonably or by presenting evidence that the person knew or obviously should have known about their medical condition.

For example, let’s say the driver had mentioned to someone that they’d been feeling dizzy and lightheaded this week. The statement could be used against them after an accident. Dizziness and lightheadedness are common early warning signs of a heart attack and can interfere with maintaining full control of a motor vehicle as required by law.

Most people don’t realize their medical history can come back to haunt them after an accident. An examination of the California medical emergency found that unsuccessful defenses often come from people with long histories of various medical problems.

It’s important to note that the medical defense doesn’t work for mental health emergencies. California Civil Code 41 says that a person can’t use mental illness as a defense to negligence and other civil claims. So someone couldn’t avoid responsibility for an accident by saying they felt suicidal, had extreme anxiety or were experiencing psychosis at the time.

Yes, You Can Sue Someone With a Medical Condition

As an injured victim, you’re not forbidden from suing someone simply because they say they have a medical condition that caused the accident. In fact, their medical condition might support your side. You and your lawyer can show they should have known about the dangers of driving.

Remember, the person also could be lying, scared or simply mistaken. Maybe they blacked out and don’t even remember what happened! None of these circumstances will release them automatically from liability.

Sometimes an older person or someone who is on a fixed income becomes extremely fearful after an accident, worried about the financial impact. This may encourage them to blame a medical condition rather than admitting they just made a driving error.

Whatever the cause of the accident, you’re still left with medical bills, car repairs and missed days of work. A lawsuit helps you get to the bottom of what happened and get your bills paid.

Your Lawyer Will Help You Reveal the Truth

When someone blames a medical condition for their car accident, it adds a layer of complexity, but it shouldn’t deter you from suing. With the help of your personal injury lawyer, you can start an investigation that includes obtaining the police report, interviewing doctors and working with the insurance companies. There may be plenty of evidence to support your side.

Doctors and healthcare facilities don’t like to be blamed for accidents and dragged into court cases, so they’ll usually comply with legal requests for medical information. Even someone’s own friends, family and employer might share something unexpected that helps your case.

Contact an experienced California car accident attorney who can help you handle a car accident that involves a medical situation. At Sally Morin Personal Injury Lawyers, we’re here for your FREE online car accident case evaluation whenever you need us.

“My husband was in a car accident. The responsible party had State Farm Insurance. I believed that was a trusted name and I could get a fair settlement. Unfortunately State Farm was only offering to pay the medical bills plus a tiny bit more. What I was asking for for a few days lost wages was very fair. I asked Sally Morin for help. Later that same week she had got me so much more than I was originally requesting. She is amazing. After paying her fees, we had plenty to cover the bills and the lost wages plus pain and suffering. The best part was it was so easy for me. Sally Morrin took care of everything. She was honest from the start on what she felt our case was worth. (We got more than that!)” – Julie

After an injury, contact the attorneys at Sally Morin Personal Injury Lawyers. We handle many areas of the law, including injuries from accidents caused by medical conditions. We believe you should be able to focus on recovering while we handle the legal details.